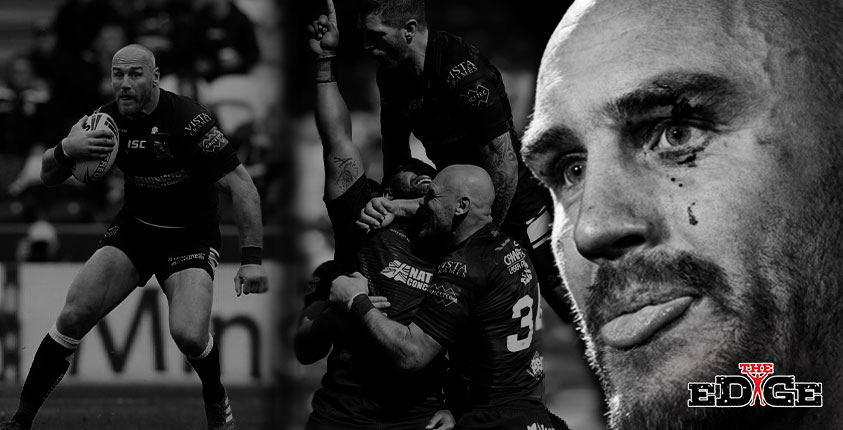 Thanks for taking the time out of your hectic schedule to do this interview for us Gaz.

Tell us a little bit about yourself?

How did you get into Rugby League and what was career path from amateur into the professional ranks?

All my family are from Castleford, and they’re massive Castleford Tigers supporters. So, I’ve always been in and around rugby, from as long as I can remember.

We used to go watch Castleford home and away. and all I wanted to do was play for them as a kid.

Although we moved away from Castleford to Selby in the 80s due to my Dad’s job as a miner, my passion for the sport never wavered. My dad who played semi-professional for Doncaster, York, and Sheffield Eagles.

I initially played rugby for Whitemoor Warriors in Selby, but it’s not a huge rugby league area, so we struggled for players and the club eventually folded.

I moved to Half Acres Trinity in Castleford. I played there until the age of 13. As I mentioned, Selby is not a rugby league town and all my mates from school played football, so I decided to play that instead and quit playing rugby.

After two years of football, my passion for rugby returned and I went to play for Half Acres again. Not long after, we all moved across to Castleford Lock Lane.

I played at Lock Lane for three years, and in my final year of under 18s I was selected to play for Yorkshire.

There were some scouts and coaches at the game from Wakefield, and they invited me to train with the academy. Four months after leaving college, I signed as an apprentice. Just three further months after that (in September 1999) I was making my Superleague debut against Wigan Warriors.

The rest is history as they say!

Where did the passion for Rugby League come from?

My passion for Rugby league came from my family, in particular my Dad.

Who has had the greatest influence on your career?

Again, I would have to say my Dad. I’m now a father myself, and sometimes find my self grumbling about taking the kids to their after school clubs. It’s not until I got a bit older that I realised just how much my Dad did for me.

Dad would often rush home from work on a Tuesday and Thursday evening pick me up from our home in Selby and then drive me down the M62 to Castleford for training. We would pick fish and chips up on the way home too.

It’s nice to see my Dad enjoying my career as much as me now. He’s literally followed me around the world supporting me, I think he especially enjoyed his visits to Australia!

It must have been a huge decision to up sticks and move your family half way across the world? How did the West Tigers opportunity arise?

From a family point of view, it wasn’t too bad. At the time we didn’t have any children, we just wouldn’t be seeing the family quite as regularly as we did.

Both Rachael and I are very close to our families, although they were very supportive and encouraged us to go. I think they were after a cheap trip down under and that was one of the real bonuses. All the family came out to see us, my Dad visited eight times! He loved it and I really enjoyed having him visit.

I have always been an admirer of the NRL. The odd family member would go on the old GB tours and my Dad would give them some money to bring an aussie shirt or two back (along with a copy of the big league magazine).

In 2006 I played with a player called Mark O’Neill. After a good year in 2006, Mark encouraged me to give the NRL – his beloved Wests Tigers – a go.

At this point I was part of a very successful Leeds Rhinos team, and it was obvious they were going to be challenging for silverware for the foreseeable future. This was a big tick in the ‘reasons to stay’ box.

However, I was 27 at the time and a four year contract was on the table from Leeds. I’m not one got taking risks, I like routine and feeling comfortable in my environment, so a big part of me wanted to stay.

On reflection, I realised this was me taking the easy option. To really challenge myself I had to step out of my comfort zone and see if I could cut it in the toughest rugby league competition in the world.

What was your experience like at West Tigers and Australia in General?

Absolutely unreal! I can’t speak highly enough of the club – from the back office to coaches and players. They couldn’t do enough for Rachael and I to help us settle in, and the players made me feel welcome from the off.

At present there are a number of English players playing in the NRL, but back in 2009 there was just myself. It wasn’t long before the players saw me as one of their own though.

When we made the decision to go to Australia, it was mainly based around factors relating to rugby. What we never really envisaged was the fantastic lifestyle Sydney offered us. Living in Sydney on the Parramatta River was quite idyllic. We certainly made the most of our time there and I think we saw more of Australia than the majority of my team mates.

It must have been a tough decision to come back home after your time in Australia, what was the main reason for coming back and why Hull FC?

I was there a total of four years and can honestly say we loved every minute of it. However, in January 2010 we had or first child Isaac. It was great bringing him up there as we were out and about beach hopping and just generally spending most of our time outdoors.

It was also great for Rachael, who met a lot of her friends through ‘pregnancy and mother’ groups. It was great for us both, as we had a circle of friends outside of rugby.

The arrival of Isaac changed our mind set. We started to miss family more – knowing they were missing out on his early years growing up. We made the decision to return home at the end of 2012.

When Isaac is old enough to realise, I think he might be angry with us for leaving Australia.

So why decide on Hull FC?

I was fortunate to have plenty of interest in my signature when it announced I would be returning to Super League. I soon narrowed it down to a few clubs.

My initial thoughts were to go back to Leeds Rhinos. I realised this was taking the easy option.

Hull not only matched the other propositions (this is important at 31 years old) but offered a huge challenge and the opportunity to be part of something. For example, being the first Captain to win at Wembley.

I was hoping again that stepping out of my comfort zone was going to bring the best out of me again.

Obviously you have been very successful during your career, what motivates you now?

I’ve always been motivated to better myself and not let anyone down. I’d hate to be the weak link in the team, and honestly if I relied on my talent alone I would be.

I identified early on that I would need to work hard to make it in rugby league and that’s still not changed to this day. My opposition are also a big motivator. The challenge of stopping an international player or an up and coming superstar has always encouraged me to be better.

We have spoken many times about injuries and how they can make a better player/athlete. Could you explain in a little more detail?

Even though I have had a few Injuries over the years, I actually consider myself very lucky. My best seasons have been following a long term lay off.

I think it gives you the opportunity to almost rebuild the body and lay some strong foundations, whilst not getting beat up every weekend. As a rugby player, once you are in the grind of the season there are very few players that aren’t carrying some sort of a knock or two.

An injury can often be a bit of respite, although it may not seem like it at the time. A long term injury can also lead to some reflection and players can come better professionals as a result.

If I can leave the training field everyday, or walk out of the gym and answer the question “have I just got better?” with “yes”, then I know I’m improving every day.

What’s your go to Recovery Modality?

Tell us a little bit about your decision to retire and how did you find retirement?

I decided to retire towards the back end of 2017, however I’d been wrestling with the decision for some time. I have always used imagery – nothing strategic, just allowing myself to have a few minutes on game day so I’m clear on my job and my role.

However, I found these thoughts became a little fuzzy and my job was no longer clear. I think the pressures of the game had gotten too much after 19 seasons and I’d lost the passion.

Retirement itself is much harder than I could ever imagine. I consider myself to be quite level headed, but I found it really difficult to get my head around it and adjust to life outside the dressing room.

I took up a job at the club which involved a lot of office-based work, but soon realised it wasn’t for me. I knew a performance-based role was the way forward.

One of the big surprises for me was my lack of motivation to train. I’d always considered myself a hard trainer, but in retirement I’d lost that drive.

I realised that I trained hard to get better at rugby; I only pushed myself every day, every session so I was a fitter stronger player at the weekend.

I decided to enter few events and challenges which helped get me off my backside and start training again.

Firstly, it was a world record attempt on behalf of the Steve Prescott foundation and Race Across Europe, followed by the great North Run and a bike ride from Manchester to Wembley for rugby league cares.

As well as getting me off my backside, the camaraderie and banter made me realise there is life after rugby and to appreciate the highs of sport.

What drove you to come out of retirement and play again?

Basically, I came out of retirement as a favour, helping out while Scott Taylor was suspended for three matches. That turned into 10 matches. I realised how much I missed it and that I still had something to offer the team.

If you could give one bit of advice to any young player coming through what would it be?

Never lose the passion you have as a kid. It will get tested, especially when being a professional rugby player becomes the norm. It’s that passion that will drive you every day.

Get something out of every session. No one feels 100% all of the time, but the best athletes have the ability to commit themselves to perform regardless. It might just take a bit more mental resilience to do so.

What have been your Career Highlights to date?

Greatest player you have played with? Benji Marshall.

Greatest player you have played against? Jamie Peacock.

Craziest player you have played with? Bryce Gibbs.

What would you have done if you weren’t a Rugby League player? Maybe a fireman???